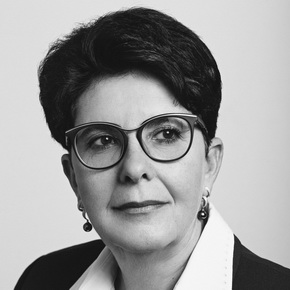 Elena Gorodisskaya has been practicing for about 40 years and is a top expert in Moscow for the protection of trademarks and other intellectual property rights.

Our Intellectual Property team headed by Elena Gorodisskaya has for many years been recognized among the leaders by most respected rankings.

Her area of practice centers on representation of clients in trademark registration disputes before the Russian Federal Intellectual Property Service (Rospatent) at the examination stage as well as in the Patent Dispute Chamber. She also handles registration of trademarks owned by large European and Russian companies, license agreements and IP due diligence.

Ms. Gorodisskaya represents clients before courts, law enforcement agencies, the Federal Antimonopoly Service and the Federal Customs Service, protecting their trademark rights, and she also handles legal proceedings in general jurisdiction and commercial courts to protect client’s other IP rights. Furthermore, she acts for clients before antitrust authorities and courts in the context of advertising violations as well as defamation claims.

Elena Gorodisskaya is a member of the Moscow Bar Association. She was actively involved in the activities of an expert team of the State Duma committee developing amendments to trademark laws, and contributed to the drafts of a number of articles and prepared proposals of the Corporate Legislation Promotion Not-for-Profit Partnership (formed by Russia's leading law firms) to amend the RF Civil Code as regards trademarks.

Registered trademarks for a number of major European and Russian manufacturers of confectionery, computers and electronics, clothing, footwear and accessories. Provided advocacy for them before courts.

Litigated for Lexmark in a third-party registration of its corporate name as a trademark and represented it in trademark registrations and in commercial negotiations.

Represented various European spirits producers in the registration of their trademarks in Russia, before the Federal Customs Committee in the context of entering marks into the intellectual property register, as well as trademark infringements.

Represented and advised a major Russian spirits producer in the context of registration of its trademarks, investment, licensing and contracting.

Publication
Is the Proposal Worthwhile?
next